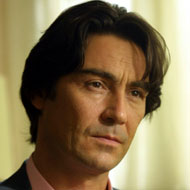 The event combines nightclub, cinema, theatre and contemporary dance, including a DJ set by Groove Armada, accompanied by book readings and spoken word performance from stage and screen star Nathaniel Parker.
Parker’s leading roles include staring in the TV series Inspector Lynley Mysteries and Merlin. He has just finished a West End run, appearing alongside Dame Helen Mirren in the Award winning stage play, The Audience. He will be reading passages from David Pinner’s Ritual, the book that inspired the film, which have been specially selected for this show by the author.