‘Live at The Riverside’ Monday 7 December 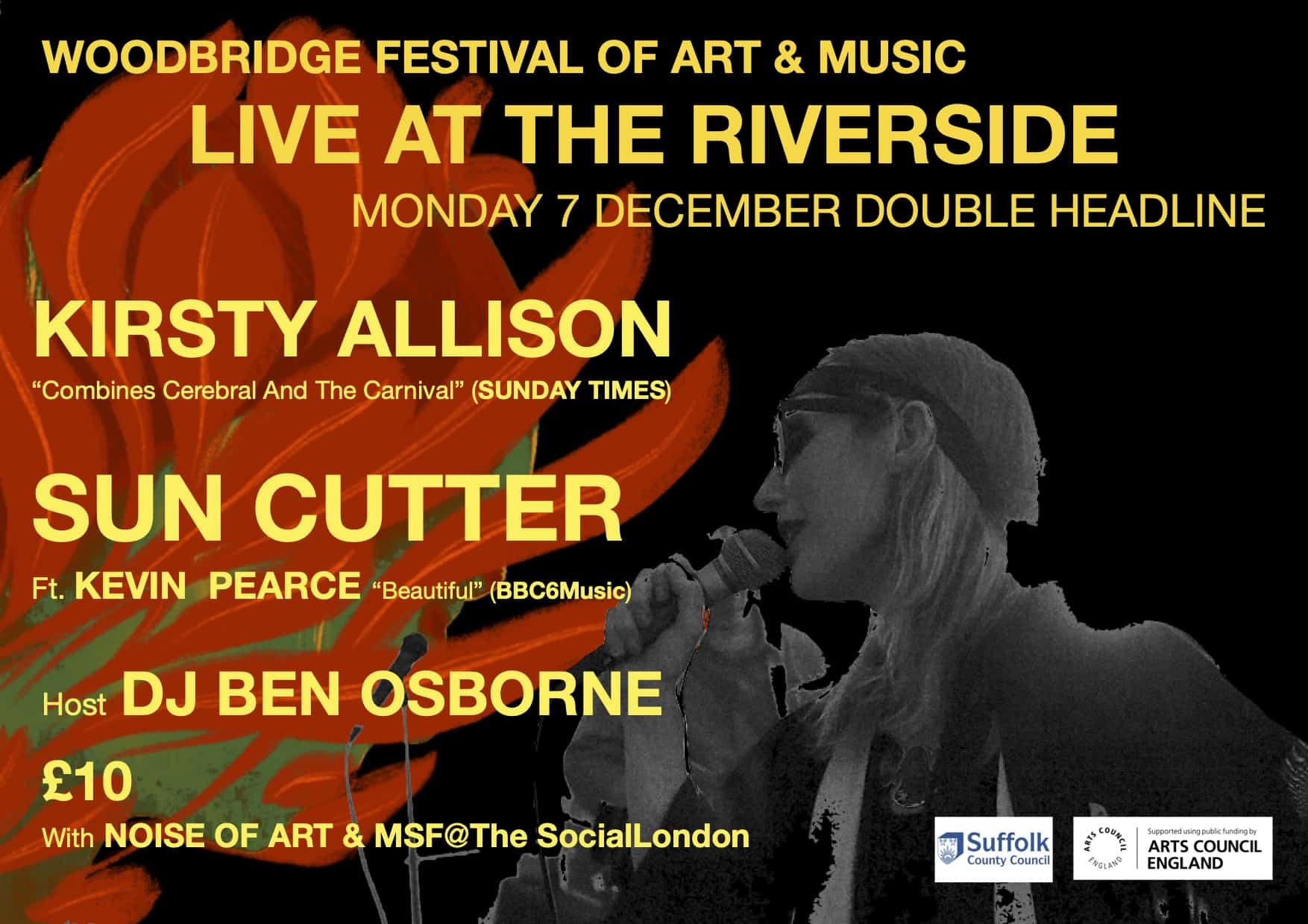 ‘Live at The Riverside’ Monday 7 December

Noise of Art is back with Woodbridge Festival for ‘Live at The Riverside’ on Monday 7 December for a double headline show with Sun Cutter (ft. Kevin Pearce) and Kirsty Allison (Vagrant Lovers) joining host DJ Ben Osborne.

As with previous events, the night is a fund raiser for Save The Riverside and Save Our Venues. Tickets cost £10 for the Socially Distanced event. Online viewing is free,  but we ask people to donate what they can to http://saveourvenues.co.uk.

Post punk poet and musician Kirsty Allison has been compared to a current day Patti Smith by Johny Brown of Band of Holy Joy and a female John Cooper Clark by us. Dr Cooper Clark, as it happens, is also a fan, while Irvine Welsh says “Kirsty Allison is the greatest cultural beacon this planet has produced”.

Allison has appeared around the world. She opened Andrew Weatherall’s Convenanza Festival in 2017, has performed with Youth, Thurston Moore, the Fat White Family and many more. Her debut LP as Vagrant Lovers will be released in 2021 and features Mikey Chestnutt (Snapped Ankles), Gil De Ray, Malik Ameer (Madison Washington), Def Presse., Danielle De Picciotto and Kelli Ali (Sneaker Pimps). She’s played Pikes Literary Festival, Byline, the Volksbuhne and Gallery 46. “She combines the cerebral and the carnival” (Sunday Times Style)… “Wordsmith wizardry” (Adam J. Harmer, Fat White Family)… and is “sexy and talented… what is not to like?” (Murray Lachlan Young, poet-in-residence, BBC 6Music).

Sun Cutter is better known to local audiences as the trio’s front man Kevin Pearce, the Suffolk/ Essex borders singer/ songwriter. Gifted with a pitch perfect voice and often likened to Radiohead in song style, he was scheduled to appear at this year’s Bearded Theory and Glastonbury festivals – and was in the middle of a tour with Turin Breaks – when COVID-19 drove a bulldozer through the live music industry.

But this isn’t the only crisis the singer has recently experienced. Two years ago he suffered a heart attack, although still a young man. As well as having to redress his excessive living, his rehabilitation saw him develop a new creative alter-ego, the Sun Cutter project. Sun Cutter has drawn comparison with the warmth of Richie Havens, Cat Stevens, Van Morrison and Tim Buckley, but with a contemporary edge. The LP was co-produced with Dean Honer (The Moonlandingz, I Monster, Eccentronic Research Council). With the first single achieving radio-play across the world in October, the LP is being released in January. Woodbridge Festival are delighted to share another live debut of new music with our audience. “Beautiful” (Mark Radcliff, BBC 6Music)… “Loving Sun Cutter” (Mark Riley, BBC 6Music ).

Kirsty Allison’s debut novel, Psychomachia, is out next year, while subscribers to kirstyallison.substack.com receive a free copy of her Now Is Now poetry collection, which will also be available at the show.

The monthly events are organised by Woodbridge Festival in conjunction with MSF and Noise of Art. Money raised from tickets go to the Save The Riverside Campaign. The online shows are free to watch, but we encourage viewers to please donate what you can afford to the national Save Our Venues campaign run by Music Venues Alliance and Musician Union. Please donate online here: http://saveourvenues.co.uk/#/

The next Woodbridge Festival Live at The Riverside dates are: 25 January, 22 February, 29 March and very last Monday of the month.